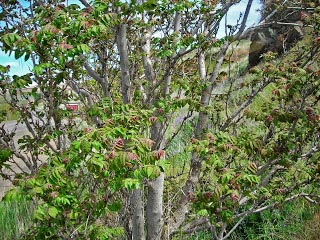 China Pete’s Fish Wheel. Wasco County.
China Pete’s Fish Wheel was on the Oregon side of the Columbia River just west of Eightmile Rapids. The wheel, a device for harvesting fish out of the river, acquired its name because of Ah Fook, its watchman and operator of the wheel in 1907. Reference: Seufert 1980: 24.

Chinaman Hat. Wasco County.
Chinaman Hat is a peak that stands 3623 feet above sea level overlooking Hollow Creek within North Pole Ridge. When viewed from the north or south, its appearance is similar to the Chinese farmer hat. When seen from the east or west, it appears like the Chinese peasant hat. U.S.G.S. quadrangle 7.5’ series, Hastings Peak, Oregon, 1980.

Chinese Building. Wasco County.
Chinese Building is located at 201 East First Street within the town of The Dalles. Constructed in 1878 after the first building burned, it was built to be fire-proof, i.e., constructed of bricks to include a layer of brick on the roof. The building served as a Chinese laundry and merchandise store to the 1920's. It is within The Dalles Chinatown and on the National Registry of Historic Places: The Dalles Commercial Historic District. See Chew Kee and Company, Wasco County; The Dallas Chinatown, Wasco County; Wing Hong Hai Company, Wasco County. Reference: “Chinatown Archeological Site.” Restore Oregon; National Registry of Historic Places n.d.; “The Dalles Chinatown.” Photo.

Seuferts Cannery China House. Wasco County.
Seuferts Cannery China House was located on the grounds of the cannery that was about one mile from the town of The Dalles. Chinese cannery crews of 20-30 workers began using the facility in 1896. The structure was divided into three rooms: one acted as a dormitory, another was a mess hall, and one served as a kitchen. The cannery owner provided pigs and ducks while the Chinese workers maintained a vegetable garden. A bathing facility was outside the building. Reference: Seufert 1980: 100-116.

The Dalles Chinese Railroad Construction. Wasco County.
Approximately 500 Chinese workers built the Oregon Railway and Navigation Company from The Dalles eastward along the south side of the Columbia River to Wallula in 1882. The line is part of today’s Union Pacific Railroad) Reference: Edson 1974: 58.