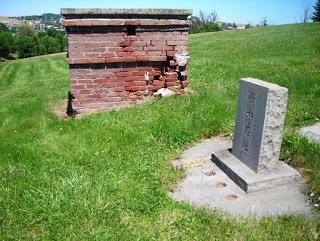 Chinese Ceremonial Furnace, Umatilla County.
Pendleton Chinese Ceremonial Furnace is within Olney Cemetery, 865 Tutuilla Road, City of Pendleton. The ceremonial furnace is surrounded by contemporary grave markers bearing Chinese names. The furnace is used to burn paper offerings as a way to help the deceased in the afterlife. The burning occurs during the April Ching Ming ceremony, a time when the grave sites are cleaned, and offerings made.  Reference: “Chinese Performed Memorial Rites at Olney Cemetery” 1992: 3-5; McDannold 2000: 82.

Echo Chinese Laundries. Umatilla County.
The City of Echo continued to have at least two Chinese laundries by 1910. The first was located in a shed behind today’s Liesegang House at 10 N. Dupont Street, the Liesegang House itself not being built until 1917. The second laundry was behind the Hotel Echo. Reference: City of Echo 2002: 15, 93.

Echo Chinese Restaurant. Umatilla County.
Nib Ying operated a Chinese restaurant on the ground floor of the Hotel Echo, City of Pendleton, in 1915. He advertised “Chinese Noodles and Chop Suey. Fresh Bread for Sale Also.” The hotel was destroyed by fire in 1925. Reference: City of Echo 2002: 93.

Pendleton Underground. Umatilla County.
Dug by the Chinese, the tunnels were initially a series of delivery passageways joining one business with another in downtown Pendleton. Eventually, the passages were connected, forming a network extending from the train station to the river.  The tunnels became the sleeping quarters for Chinese as well as housing various businesses. See Hop Sing’s, Umatilla County. Reference: Millwright 2004: 14.

Camp Carson Ditch.
The Camp Carson Ditch ran from Anthony Creek to the Grande Ronde watershed. It provided water for placer mining in the area, to include Tanner Gulch. It was constructed by Chinese laborers in 1873. Reference: U.S.G.S. Quadrangle, 7.5’ series, Anthony Lakes, Oregon, 1984; Wegars 1995: 51-52; Meade 2006: 119.

Camp Carson Placer Mine.
Mining started at the Camp Carson mine in Tanner Gulch in the early 1860's. It became a hydraulic mine operation with the Chinese working the placer deposits. Reference: Steeves 1984: 110; U.S.G.S. Quadrangle, 7.5’ series, Limber Jim Creek, Oregon, 1984.

China Cap Creek.
The headwater of China Cap Creek is on the northwest side of China Cap Summit. It flows northward for about five miles where it joins the Minam River. Reference: U.S.G.S. Quadrangle, 7.5’ series, China Cap, Oregon, 1992.

China Cap Summit.
Located at the southern tip of China Cap Ridge, the summit is 8656 feet. The name is thought to have been derived from the peak’s shape that resembles the shape of a peasant hat worn by the Chinese in the 1800's. See China Cap Ridge, Union County. Reference: U.S.G.S. Quadrangle, 7.5’ series, China Cap, Oregon, 1992; McArthur and McArthur 2003: 198.

China Diggings.
China Diggings was located on the west side of Wolf Creek. It was the site of Chinese placer gold mining. Reference: U.S.G.S. Quadrangle, 7.5’ series, Tucker Flat, Oregon, 1980; Walker 1973.

Grande Ronde Lake Dams.
The dams at Grande Ronde Lake were constructed by Chinese laborers. Built across the outlet of the lake, they provided water for mining. Reference: Steeves 1984: 108-109.


La Grande Chinatown.
La Grande Chinatown was located in the block north of Adams Avenue on Court Street in the town of La Grande. It had an herb doctor, laundries, and restaurants. Anti-Chinese activity resulted in a mob burning and plundering the Chinatown on September 24, 1893. The Chinese were forced into a temporary camp and quickly placed on a train leaving La Grande. By 1898-99, the Chinese were brought back to work in local sugar beet fields; thereby reviving Chinatown. There were still two Chinese businesses in Chinatown by 1946. Photo. Reference: McConnell 1979; Wegars 1995: 11, 27-28.


Mud Lake Dam.
Constructed in 1867, the Mud Lake Dam provided water for Chinese placer mining at Camp Carson. The dam was destroyed in the same year by non-Chinese who did not want the Chinese to use the water. Reference: Steeves 1984: 110.


Two Dragon Camp.
Two Dragon Camp was located near an unnamed stream that flows westward into the Grande Ronde River. As many as 100 Chinese miners worked the 2.5-acre area.  Archaeological evidence indicates that it was a settlement, constructed between 1870 and 1890 and was occupied for two-five years. The place name was given to the location by the anthropologist who conducted extensive work at the site and was derived from its feng shui. Reference: Wegars 1995: 51-52; Mead 1996: iii; Mead 2006: 262.
References


McConnell, Gregory. 1979. “An Historical Geography of the Chinese in Oregon.” University of Oregon MA thesis.