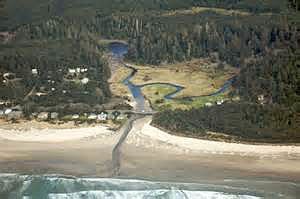 China House. Lincoln County.
China House was part of the operation of the Kernville Cannery. The cannery, established in 1896, was located near Coyote Rock on the north side of the Siletz River, six miles from its mouth. China House consisted of a mess hall and sleeping facilities for the 25 Chinese cannery workers. The workers came on a seasonal basis from Astoria. Reference: Gardino and Riedel. 2010.

Placer Lake Chinese Diggings. Lincoln County.
Placer Lake is on Reynolds Creek about four miles south of the community of Waldport. The creek flows into and out of Placer Lake. A Euro-American had filed mining claims in the area during the 1870's but there was little gold mining activity until the Chinese began to work the deposits in both the lake and creek. Reference: Guardino 2008: 34.