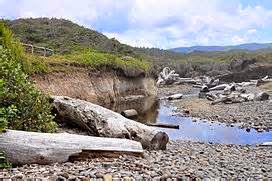 China Flats. Lane County.
China Flats was near Rose Hill on the bank of the Siuslaw River. A seasonal settlement was established there when Chinese cannery workers came into the Florence area to work. Reference: Powell 1990: 13.