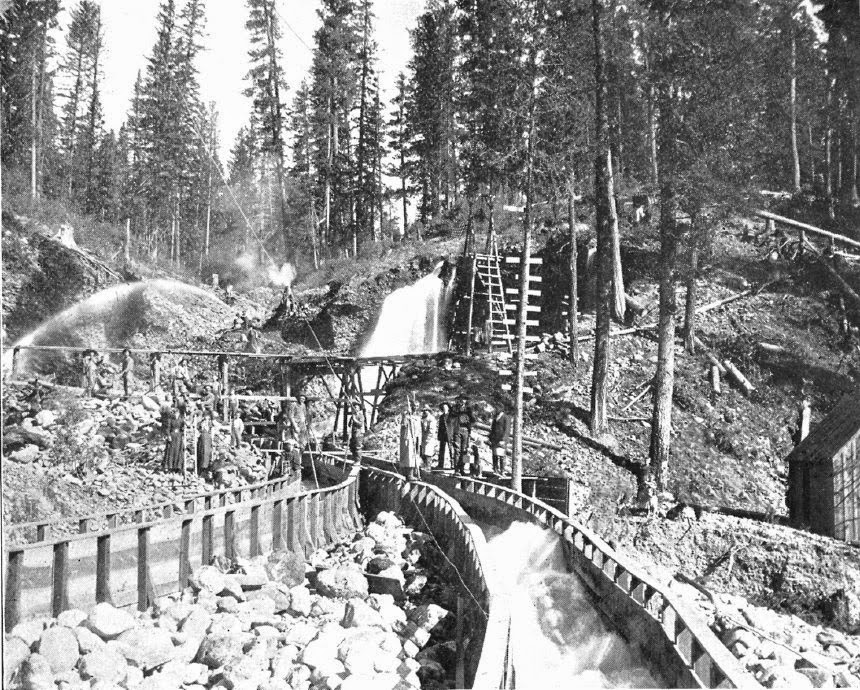 Ashland Chinatown. Jackson County.
Ashland Chinatown was located on A Street across from the railroad facilities. The Chinese serviced the trains and performed railroad maintenance. Wah Chung was a prominent figure within the community. The Chinatown also contained stores and a laundry. Ashland Chinatown ceased to exist by 1941. Reference: Atwood 1976: 12, 22; LaLande 1981: 33.

Buck Rock Tunnel. Jackson County.
The west portal of Buck Tunnel is approximately 12 miles east of the town of Ashland and off Oregon Route 66. Chinese workers dug the Oregon and California Railroad Company tunnel in 1884. It was meant to connect with a similar tunnel being dug from the east. However, the project was abandoned before the tunnels connected. Reference: Eastman 2022.
Buncom Mining Area. Jackson County.
Chinese placer miners in the 1870's worked the played-out claims around Buncom, located at the mouth of Sterling Creek where it flows into the Little Applegate River. Reference: Fowler and Roberts 1995: 29, 31.

China Gap. Jackson County.
China Gap lies within a ridge separating Pleasant Creek to the north and Sykes Creek to the south. Its elevation of 1842 feet above sea level and provided easy passage across the divide. Reference: U.S.G.S. Quadrangle 7.5’ series, Wimer, Oregon, 1996.

China Gulch1. Jackson County.
China Gulch is between Star Gulch and Palmer Creek, about one half mile west of the Applegate River. Placer mining first occurred there in the 1860's with hydraulic mining beginning in the 1870's. Artifacts indicate a Chinese presence. Reference: LaLande 1981: 30, 40; U.S.G.S. Quadrangle 7.5’ series, Ruch, Oregon, 1996.

Flumet Gulch Mine. Jackson County.
Flumet Gulch was the location of one of several gold mines owned and worked by Gin Lin. The mine is within the Palmer Creek Diggings Mining District. Reference: U.S. Forest Service, Rogue River-Siskiyou National Forest.

Gin Lin’s Camp. Jackson County.
Gin Lin’s Camp was located on the south side of China Gulch1 by 1881. It consisted of a residential structure, storage sheds and outbuildings. Gin Lin purchased his first claim on the Lower Little Applegate River in 1864. He moved from China Gulch1 to the Rogue River near Galice Creek in 1885. Gin Lin returned to China in 1894 where he died in 1897. The camp is within the Palmer Creek Diggings Mining District. See Gin Lin's Camp, Josephine County. Reference: LaLande 1981: 182-187; U.S.G.S. Quadrangle 7.5’ series, Ruch, Oregon, 1996. Photo.

Ginko Creek. Jackson County.
Ginko Creek, approximately 10 miles in length, begins near Red Blanket Mountain and flows into Mill Creek north of the town of Prospect. The name is reportedly derived from a gingko tree though to have been planted by Chinese miners near their camp. The seed and leaf are important components of Chinese medicine. Reference: McArthur and McArthur 2003: 403.

Grand Applegate Ditch. Jackson County.
The six miles long, north flowing Grand Applegate Ditch diverted water from Carberry Creek to the Grand Applegate hydraulic mine. Chinese laborers constructed the canal during the winter of 1878-1879. The claim itself was purchased by a Chinese mining company in 1886. Reference: LaLande 1981: 200-202.

The Chinese Wall. Jackson County.
The Chinese Wall is located at the Palmer Creek Diggings. The wall is 300 feet in length and 12-15 feet in height and 6-9 feet wide at its top. The stacking of cobbles and boulders associated with hydraulic mining was accomplished by Chinese miners who removed the material left by the hydraulic mining and stacked it out of the way to retrieve small amounts of gold. Gin Lin was the owner/operator of the mine. Reference: LaLande 1981: 195-199; U.S.G.S. Quadrangle 7.5’ series, Ruch, Oregon, 1996.

Tree of Heaven. Jackson County.
The +100-year-old Tree of Heaven within Lithia Park is in the town of Ashland. The tree is thought to have been planted by Abel Helman’s (1824-1910) Chinese cook. It was a common practice for Chinese in the 1800's to plant a Tree of Heaven wherever they went because its berries, bark, and roots have medicinal properties. The park was placed on the National Registry of Historic Places in 1982. Reference: “Lithia Park.”

Atwood, Katherine and Frank A. Lang. 1995. As Long as the World Goes On: Environmental History of the Evans Creek Watershed. U.S. Department of Interior, Bureau of Land Management, Medford District. http://www.blm.gov/ Accessed March 7, 2011.

Mead, George. 2006. A History of Union County with An Appendix the Chinese in Oregon. LaGrande, Oregon: E-Cat Worlds.

“Unlike Most Chinese Immigrants of His Time, Gin Lin Found Respect and a Mountain of Gold.” http://www.articlesbase.com/ Accessed March 6, 2011.